Have you heard a gowk this year?

A gowk is apparently an old Sussex word for a cuckoo.

Cuckoos are surrounded with more folklore than any other birds. At one time, people believed the cuckoos actually brought the Spring with them. Sussex locals are advised to turn the pennies in their pocket over, when they hear the first cuckoo to ensure they are never short of cash in the year to come. Alternatively they may prefer to head to the nearest inn to drink the bird’s health. I’m not sure pennies would go far in most pubs these days!

I heard a cuckoo recently for the first time in years, from Riverside Park in Newhaven. It was wonderful to hear one there in this fantastic open access land. 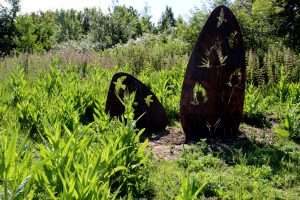 Riverside park covers 18 hectares with a wide range of habitats, on the edge of Newhaven. At lower levels there are ponds, ditches and reed beds. As you walk round you travel through bare ground, herb rich grassland, scrub and trees. You can find out more about this reserve from “Riverside Park Community Voice”

Cuckoos have declined by half in the last twenty years, and it’s not clear why. The BTO started satellite tracking cuckoos, to find out more, about where they are, when they leave the UK. It’s a fascinating study, do take a look at where the tagged cuckoos are now.

Cuckoos actually only spend a matter of weeks in the UK each year. They mate, lay their eggs and then fly back to Africa.

As most people know, cuckoos don’t raise their own young, instead laying their eggs in other birds’ nests! The female lays up to 25 eggs in different nests. Their favourite host nests include meadow pipit, dunnocks and reed warblers. So look out for these birds, who will almost certainly be exhausted, trying to find enough food for the monster sized chick in their nest. The young cuckoo will have almost certainly ejected any other eggs or chicks that were there! 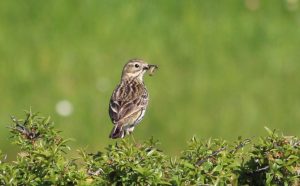 The young cuckoos stay in the nests for around three weeks, by which time they are around three times the size of the parent birds that have been feeding them. They then make their own way all the way back to Africa.

Do come back again next year precious gowks!

Many thanks to Leigh for the fantastic cuckoo photograph. You can see more fabulous photographs here on flickr