An introduction to the Last Wood and Meadow, Seaford by Bob Eade

Bob Eade has been recording insects at a site at the edge of Seaford since 2006. We asked him to give us more information about his sightings in the woods and meadow.

In 2006 I moved house and found myself near to the Last Wood.  Whenever I went for a walk onto the Downs I would walk across the meadow to access the path leading up to the Comp path.

My first really good find on the edge of the meadow was on a very wet day back in July 2007 when I somehow spotted a White-letter Hairstreak under one of the Elms sheltering in the wet long grass. This turned out to be the first sighting of this species in the area, and on sunnier days  a few more were seen nearby.  Unfortunately since those times the Elm population has been hit very badly with the dreaded Dutch Elm Disease.  However, the White-letter Hairstreak can still be found on the site with several males seen this year feeding on the Bramble Flowers.  We hope that the colony continues to survive on the scrub Elm, until the recently planted disease resistant trees are large enough to support the butterflies.

Since those early days I have seen over 30 different species of butterfly on the site, this is actually over half of the British butterfly list!!

Marbled White is the most obvious butterfly in the Summer.  The flight season is from mid June to late July and they can be very numerous.  On a warm summers evening they can give a great display as they go to roost. 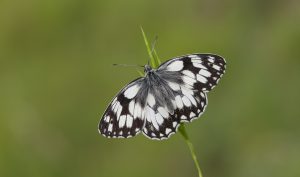 Some species have become scarce over that time,  I haven’t seen a Grizzled Skipper on the site for a few years, despite Wild Strawberry growing in profusion which is one of the larval food-plants.  Brown Argus have also had a big drop in numbers over the last couple of years.

The lack of management has really helped the Marbled White as the grasses growing in profusion is used by the larva of this species, however, some species have suffered due to lack of keeping areas in control.

Several interesting flora is also found on the site.  Pyramidal Orchids certainly grow very well and due to the longer grasses these Orchids grow much larger than those on the nearby Downs.  Large areas of Ground Ivy and several Vetches are also there.  Mullein provides food for the Mullein Moth larva and these colourful caterpillars can be seen on the plants.

The wood is also home to Badgers, and birds that are thought to nest there include Green and Great-spotted Woodpeckers, Tawny Owls and Sparrowhawks.

In the Winter Firecrest are often found there along with their closer relatives, Goldcrest.

In the meadow Green Woodpeckers are often seen as they feed on the Ants, Kestrel also hunt there and Common Whitethroat successfully nest there.

As far as management goes some clearance work would be good in the area near the bottom of the slope near the road. At the moment there is a large area of dead Ash, and it would be good if these were cleared and some downland flowers were grown in that area with a couple of mowings over the season.  This could well help some of the Blue Butterflies as well as helping Dingy Skipper and encouraging the return of the Grizzled Skipper.

Thanks for that Bob, it really is a special site. You can find more Bob’s wildlife blogs and photographs here.

You can find the Last Wood and meadow off Alfriston Road. It’s the last area of woodland before open fields, to the left of a footpath. The site is owned by Lewes District Council.

Bob is not the only naturalist keeping a close watch at the Last Wood, Mike Kerry has also been recording insects here, and has now set up an open facebook page, so that the growing number of “fans” of the Last Wood can share their sightings and photographs. 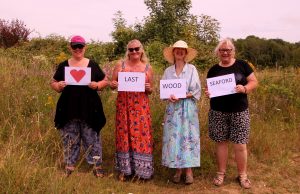 During the first week alone, there were photographs of 13 species of Butterfly, 10 of Hoverflies, 4 species of Spider, 3 Beetles, 2 Cricket/Grasshopper, a Dragonfly, 2 other flies, and that was before the Bees and Wasps! 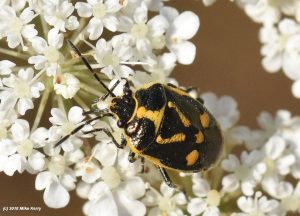 You can hear more about the Last Wood at our next Network Meeting in Seaford on 4 September when Seaford Tree Warden Margery Diamand tells us more about plans to form a “Friends of Last Wood Seaford” group, to ensure the protection and appropriate management of this precious site. Do get involved if you can!

If you would like to share your wildlife sightings in your local green spaces, we would love to hear from you. Please get in touch via the website!