“Law is like fire, for it lights as truth, warms as charity, burns as zeal” (from The Song of Lewes, a Latin poem written by an unknown churchman after the battle of Lewes)

Have you visited the beautiful site of Lewes priory? The priory ruins date from the 11th century, built by monks from Cluny in France and survived for 450 years until the Dissolution of the Monasteries in 1537.

The site with its evocative remains retains an air of tranquility and serenity. The sweep of the South Downs which frame the site provides a spectacular setting for an afternoon out.

There is much to see at Priory Park which is a public park with free access for all. Impressive interpretation panels allow you to walk in the footsteps of medieval monks and imagine how the buildings once looked. A recreated herb garden grows plants that monks would have used for medicinal, culinary and ceremonial purposes. 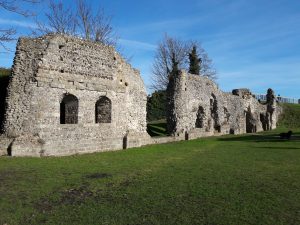 There is increasing controversy about the use of chemicals to control weeds and pests. It is wonderful to see areas that were previously mowed and weeded becoming managed as areas of wild flowers.

However there are times when weeds do have to be dealt with, for example to ensure vehicle safety on roads and to maintain the integrity and safety of our homes and other buildings. With a site as old, and precious as the priory ruins, it is particularly important to take care and protect the old remains, which is where Burleys come in.

The Royal Warrant holding, grounds maintenance specialist Burleys has become one of the few contractors nationwide to use an award-winning system, Foamstream, on a commercial basis in Lewes for Lewes District Council. The system uses a combination of hot water and foam to ‘cook’ weeds on contact. The thermal energy penetrates the weeds’ waxy outer leaf layer, rupturing the cells, killing them quickly. Some die within minutes, with others taking a day or two. A second application can eliminate taproots. It also sterilises seeds and spores – helping to reduce future weed growth.

The organic, biodegradable foam mixture is safe to use on sensitive sites such as nature reserves, heritage buildings, watercourses and children’s playgrounds. 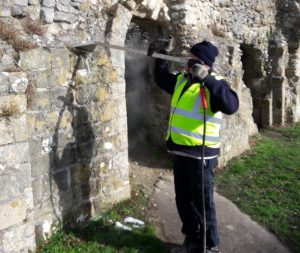 It is made from a blend of natural plant oils and sugars including maize, wheat, potatoes, olive and coconut oils.