Events were organised at Friston Forest, Seaford Head, Racehill Community Orchard, Castle Hill in Newhaven and Lewes Railway Land. This is a great way to get different groups involved, introduce people to bats, and to formally record the bats identified in our precious green spaces. 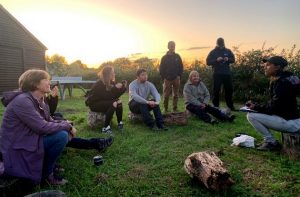 There are 18 species of bat that have been identified in Sussex. These include Serotine, Common and Soprano Pipistrelles, Daubentons, Natterer’s and Noctule

A massive thanks goes to the Sussex Bat Group who facilitated the surveys over the various green spaces, in particular Kim Dawson who worked hard to make this happen.

“About ten of us gathered in the garden at the Lewes Road Hut, a little after seven that evening, to be given an introduction to bat surveying by Kim of the Lewes Rangers. Given the closeness to the River Ouse, the Valley Ponds area and the newly created wildlife ponds, Riverside Park seemed a likely hunting ground for bats, and those of us who live close to the park are very aware that there are bats hunting over our gardens, in the dusk of a summer evening.

We just have no idea which species these might be, or if there are many different species in our patch.

Kim introduced us to the method of survey (listening to the ‘bat sonar’ as each species has different calls) and to the possible species we might find in our survey. Each species varies in when it is active, (some beginning to be active just before sunset, and some a little later in the evening) and in which insects they hunt. Bats actually have excellent eyesight, but their sonar allows them to hunt in low light conditions when their prey is most abundant, and when they face no competition from birds.

They are of course dependent on the activities and abundance of the species they prey on, and this will vary with time of year, time of day and the air temperature.

As bat calls are too high pitched to be audible to most people (although some children may be able to hear the sounds) our survey used a number of handheld ‘transponders’, about the size of a mobile phone, (or in the case of our survey leader, a mobile phone with a special attachment) which receives, and modifies, the frequency of the bat call into audible sound for humans.

Our leader’s device actually analysed the call, and gave a probable identity for the caller. Each species of bat has a distinct frequency, and pattern of call, which sometimes varies as the bat gets close to its quarry.

We walked north along the riverbank of the Ouse, before turning back into Riverside Park along the Egret’s Way path, where we saw, and heard, our first bats, a few moments after a glorious sunset. 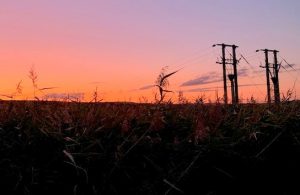 Apparently our hunters were common and soprano pipistrelles, and we were entertained by probably a dozen sightings, the bats flying in and around the bushes beside the river. We moved up onto the upper ground of the Park and made our way slowly across the Park towards the area closer to the C7. We had a distinct dearth of sightings across this area of the Park, but as it was getting darker, the air temperature fell sharply as well. Since insects are less active at lower temperatures, the bats will stop hunting. Although different species of bats will hunt moths and other insects which may not be so temperature dependent, we did not encounter any more bats here, so we headed down to the Valley Ponds area, hoping that the proximity to water might attract more insects and bats.

However, the temperature continued to plummet of this very clear evening, and we were unlucky at the Ponds area as well. Our survey finished at around 8.30, as by then it was getting distinctly chilly.

Despite having seen only one species of bat active in our area, it was fascinating to hear the calls of those we saw, and to see how the pattern of the call altered as the bat ‘caught up’ with its prey. I suspect this group would be very keen to come out again were there to be another survey, as we have all learned something new this evening.

I haven’t heard bat calls for real since I was a very small boy back in rural Essex, so I’m definitely hooked!”

Kim’s initial report is shown below

“A massive, massive thank you to all of you for making the night such a great success – from all reports it was much enjoyed, and well attended.

In total over 100 people came out to enjoy the evening to learn more about our amazing bats – provisional results below:” 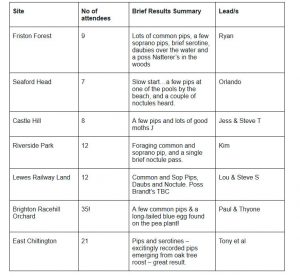 If you went to one of the bat events, we would love to hear all about it!