Continuing our “Bees Needs” theme, we asked Rose who manages a primary school garden, which plants the bees liked the best. This garden is a fantastic resource for children to learn about nature in a garden managed for wildlife. The plants also have to be resiliant to cope with the challenges of the playground!

During June we had bees on 2 of the giant echium pinninana. These can survive a mild winter in the car park near a steep south facing bank. 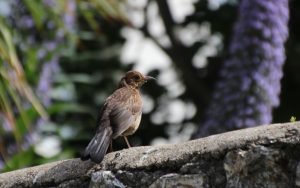 (Echiums in Seaford Community Garden behind the Peace Garden)

All the following plants attract approximately 10 insects per square yard (unlike the cornfield annuals one contractor decided would be an improvement!)

• Catmint in hot playground beds (it survives the balls!) and it also hangs over the edge of a retaining wall in a bicycle courtyard.

• Borage in the kitchen garden. It self sows for a second crop if we don’t weed out the seedlings by mistake! 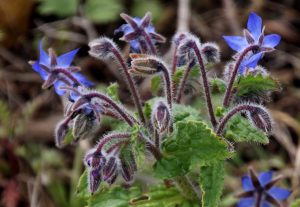 • Eryngium gigantium. It shines silver but may self seed too much for a prickly plant.

• Green alkanet. This is a nuisance in a garden and it tends to smother and has a very deep thick root but it will grow in a hedgerow. 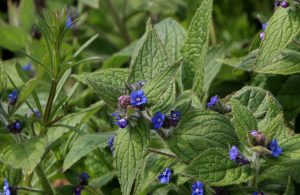 Earlier, the bees were on the rosemary plants on the playground (they are another good ball survivor…..), when they are grown against a south facing wall, they begin to flower in winter.

Later, they will be on the lime tree which has now been pruned to put the picking of the flowers out of reach.

Ivy flowers in a sunny place tend to be removed by contractors when you aren’t watching….as is the bramble patch you wanted to keep for insects….sadly, this Summer the hunting places used by our children, and the bees etc, have been slashed. We will keep trying!