Keeping In Touch With Nature – A short walk, with a lot to see.

We are indeed living through strange times.

With most of us confined to our homes, it’s hard to imagine how things will look a year from now when Spring comes round again.

Some of us are probably feeling the strain already after only a week in ‘lockdown’ with no end in sight. It must be especially hard for those without a garden, as we all know how beneficial it is to breathe the fresh air and engage with the natural world.

One of my favourite pastimes is walking in the beautiful countryside that surrounds us in this part of the world. I enjoy photographing nature as I come across it – I don’t wait patiently for it to come to me but just walk and snap!

Although my walks tend to be relatively local, I do usually use the car to get to my start point, so now that the government has recommended that we can only take a walk starting from home it has caused me to think a little harder about where to go.

Actually it has been something of a revelation to me to stop and notice what is around me just a little more closely, to engage all the senses, not only look but listen, smell and, sometimes, touch. (Maybe refrain from tasting as at least one of the things I’m going to mention is poisonous as we shall see.)

Yesterday I did a circular walk starting from my house in Seaford – it was about 6000 steps according to my trusty Fitbit (or 1.5 miles I think) and took me very slightly over the permitted hour as I was walking slowly.

I first walked to Blatchington Pond where a few other people were also enjoying the beauty of this wonderfully managed little oasis of calm. There were a couple of early emerging comma butterflies flitting around and some bees, with the mallards swimming serenely on the water. 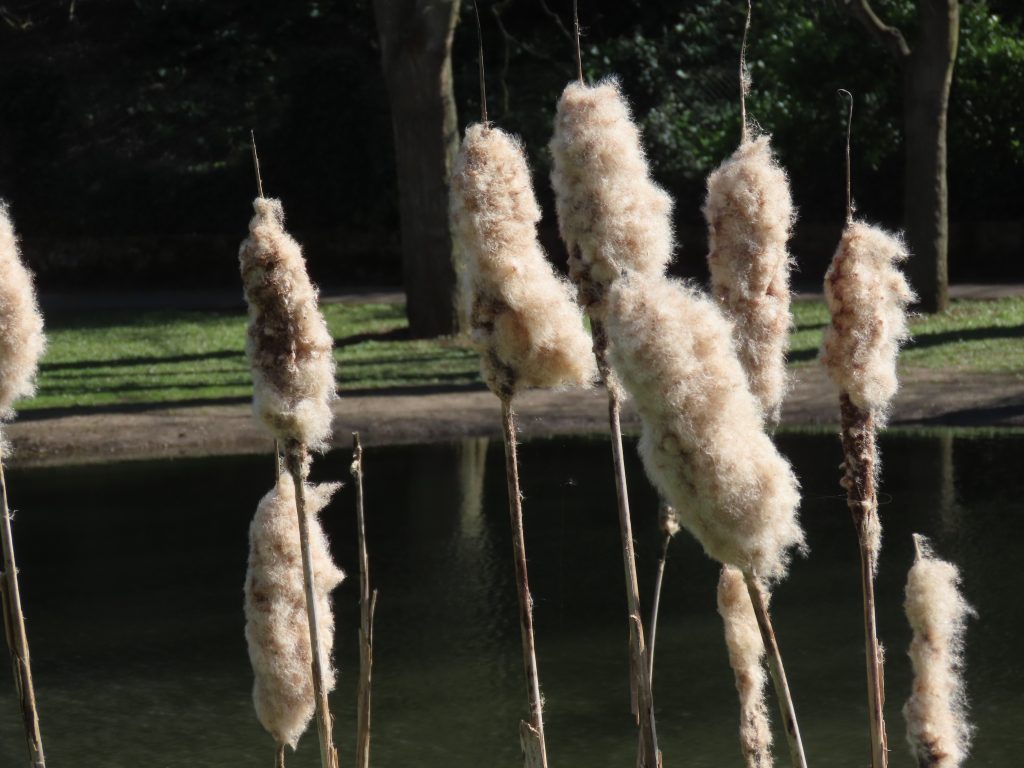 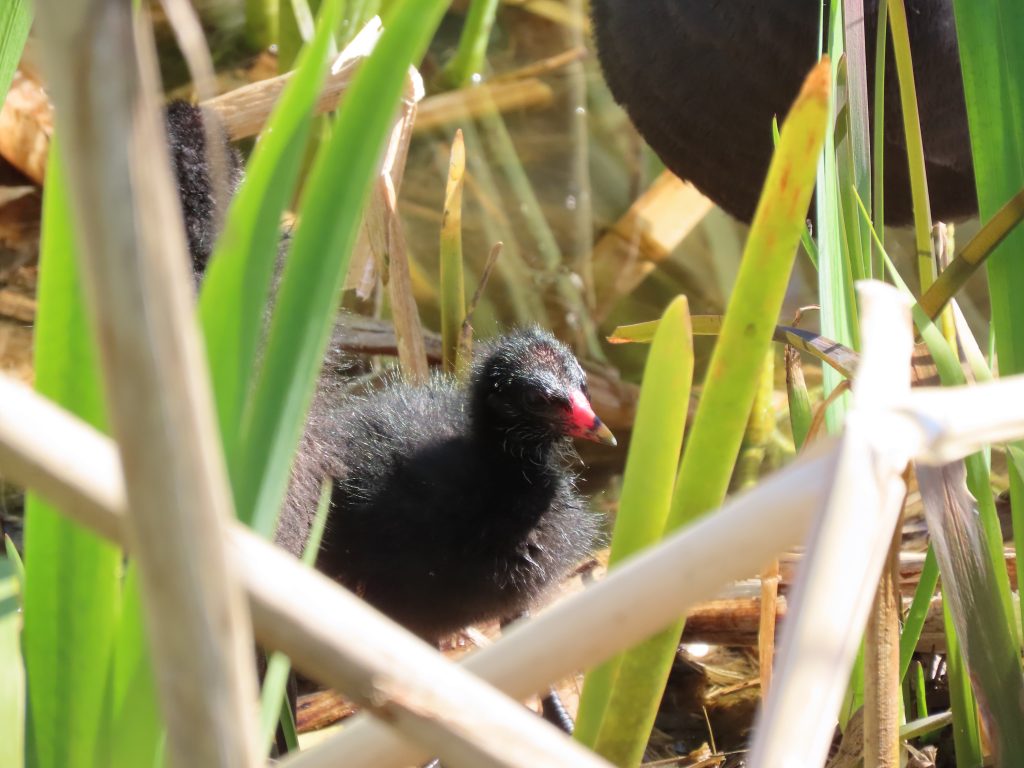 I needed to keep a distance so as not to disturb them, but I was able to see a mother moorhen on her nest with her two babies. Water birds but not ducks and without webbed feet, moorhens are very common on ponds and lakes. They were all busily preening in the sunshine until Mum went off with a big flurry of feathers and a splash and left them to their own devices.   Baby moorhens are perhaps not the most photogenic in the animal kingdom but still beautiful in their own distinctive, scraggy way. They favour the Boris Johnson style of coiffure!

Further along were more reeds swaying in the wind and a big bank of narcissi all turning their heads to the sun so I only got a shot from behind! 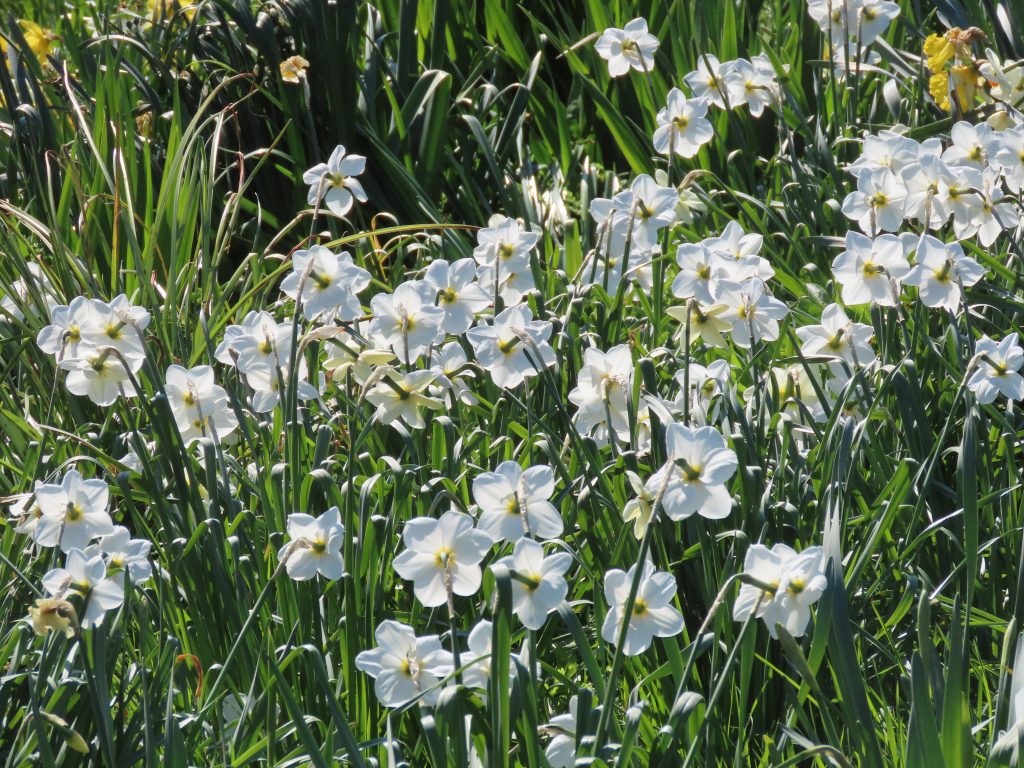 Passing the well-tended flower beds around the War Memorial and the huge holm oak tree there (how many of us ever stop to look at that magnificent tree?!) I crossed the very quiet A 259 and walked on to the Crouch Gardens, where I was truly amazed at the mass of flowers around the old stone arches. I am not usually a fan of formal flower beds but these are absolutely beautiful. I felt a bit sad that no one will be appreciating that beauty or the planning and hard work that went into them. But the thing that was most noticeable was the smell of them – it was like being in a perfume factory- the air was full of the most delicious fragrance. Was this at all due to the lack of human activity I wondered or was I just taking more time to notice? 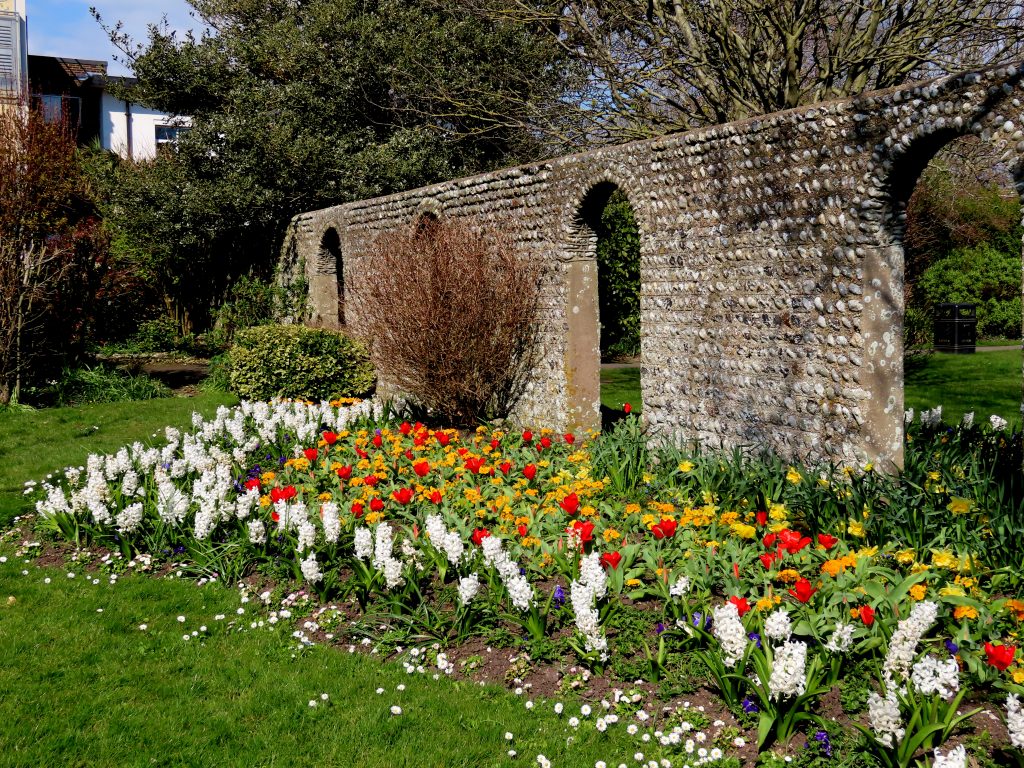 The flower beds at the deserted bowls club were also on a great show with no one to see but me.

I passed the eerily empty children’s playground with its ‘closed’ notice and skirted round the edge of the equally deserted football pitch where I looked up and saw the sticky buds of the horse chestnut tree just waiting to burst into leaf.

At this time of year when the trees are in bud it is easy to spot the birds busily building their nests.

It’s really important not to disturb them of course but you may be lucky enough to see the parent’s head or tail peeking out over the edge of the nest as they incubate their clutch of eggs. Or later on hear the ‘cheep cheep’ of the nestlings calling out ‘me, me, me’ ‘my turn my turn’ and jostling for position at the front as the parent flies in with whatever tasty morsel they’ve been lucky enough to hunt down.

This nest made of sticks doesn’t look at all comfortable and I would guess it belongs to a crow. 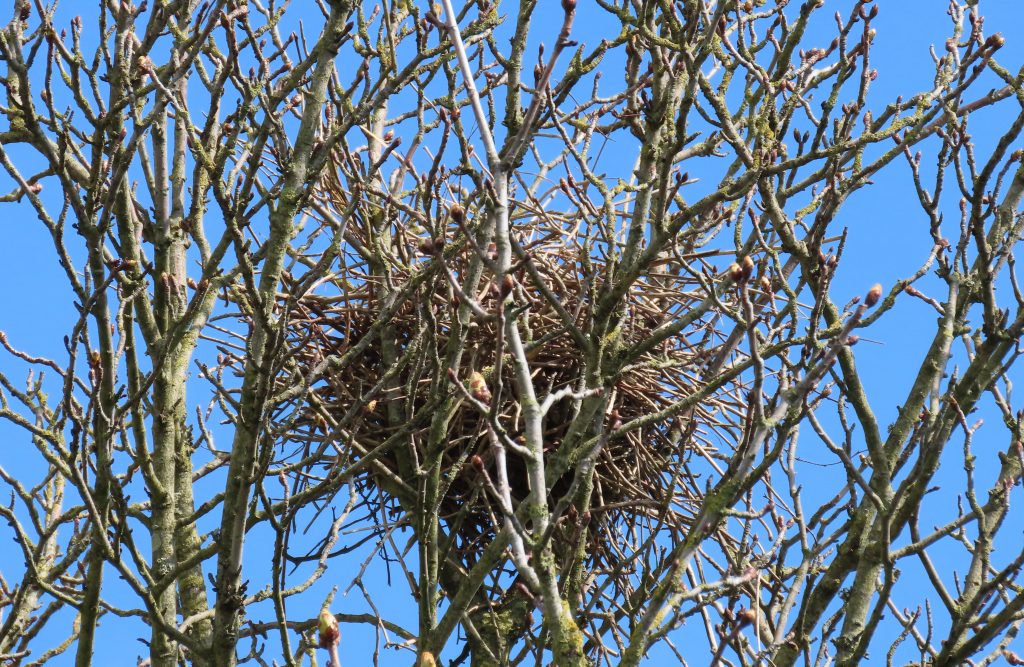 However another one with the mother wood pigeon’s tail just visible, looks a little more comfortable lined with cosy leaves.

Walking down onto Steyne Road and Sutton Avenue, I thought it would be a bit more challenging to spot anything on the streets but I was wrong.  In the gutters and around the drains were growing what might be called weeds, but weeds are after all only wild flowers whose seeds  have been unfortunate enough to grow  in the ‘wrong ‘place.

Now, without people and cars to disturb them they are living their lives as best they can , providing visual beauty for those that care to look but more importantly vital nourishment for early bees, butterflies and other insects. 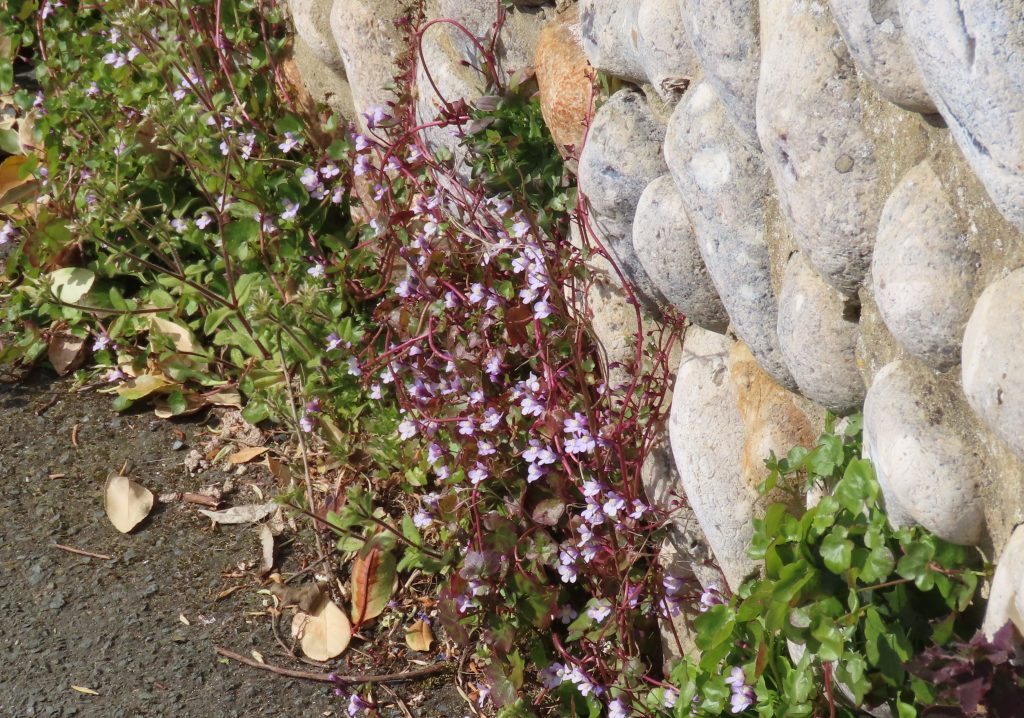 We’ve lost a lot of trees in Seaford, they have been felled due to disease but even their stumps are providing homes for insects and a variety of well camouflaged fungi. 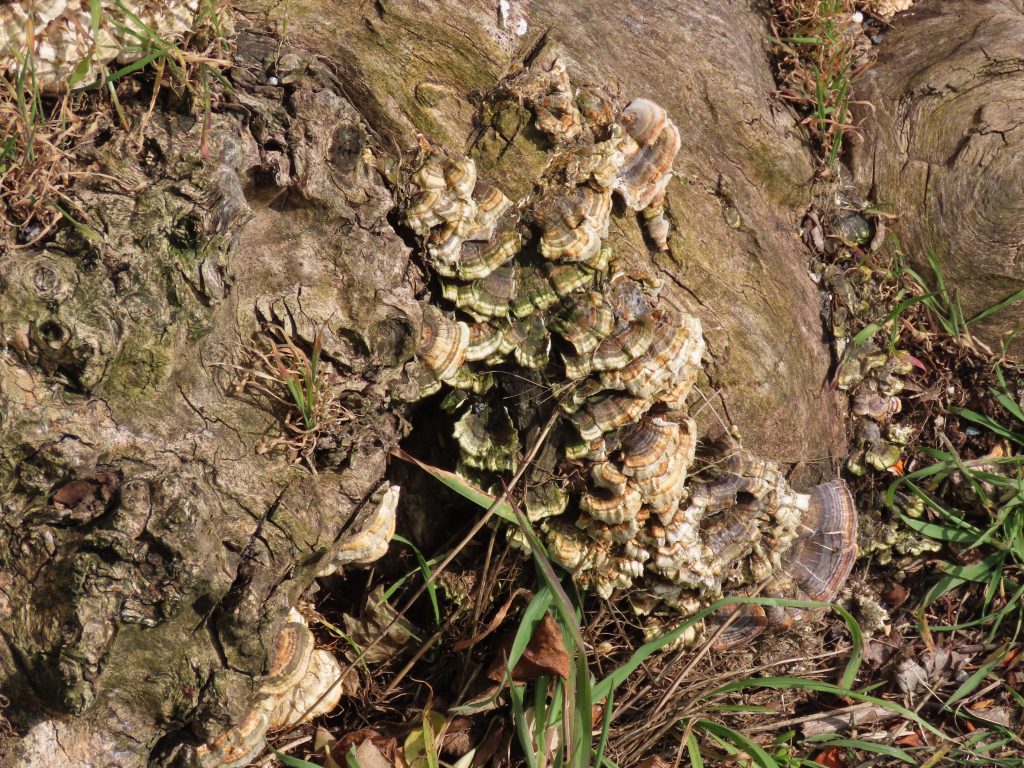 I didn’t see any on this walk, but in some streets residents have planted flowers around, and actually in the stumps which helps to offset the sadness some of us feel to see them.

In gardens too, cultivated  flowers and trees  are putting on a glorious springtime spectacle, purple irises, flowering currant (which don’t smell too good)  and blossom trees all providing for their insect visitors. 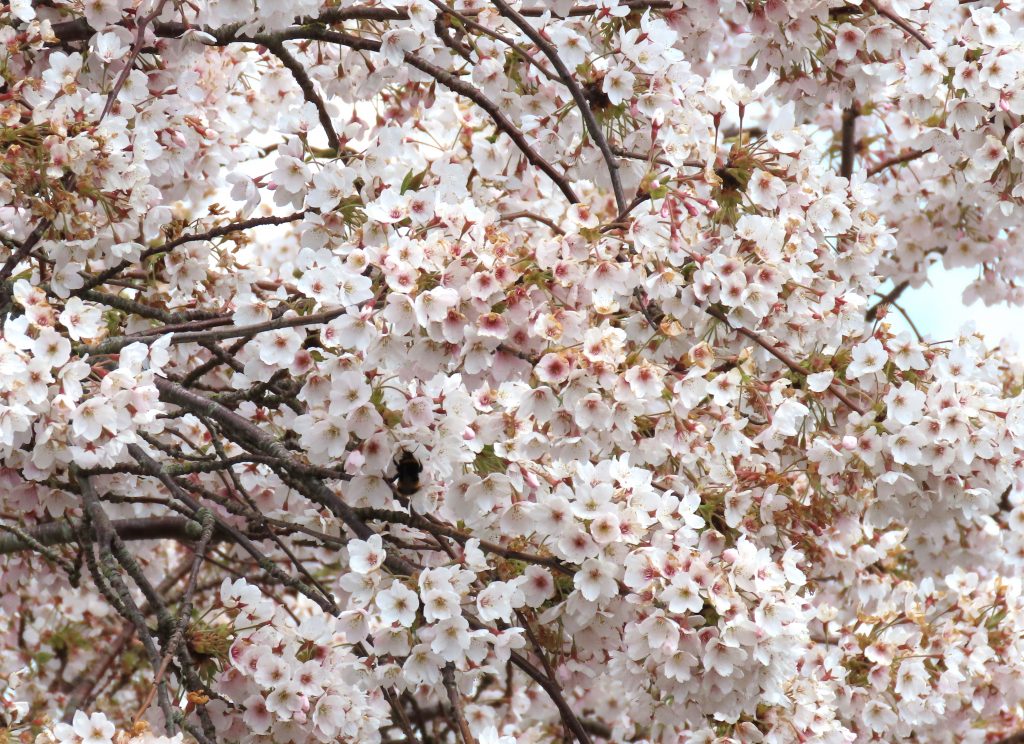 Even though I’m not a child, and am not walking with any children today, it’s still fun to look out for rainbows or teddies that people are putting in their windows.

I love to see the grass verges left uncut even though not everyone does- it’s amazing the number of wildflowers that appear.

Turning left onto Arundel Road this verge, in appreciation of being freed from the footsteps of crowds of children heading home from school, has thrown up an abundance of glorious dandelions basking in the sun.

Seagulls or to be more exact, herring gulls are a controversial topic I know. They are a marmite bird and personally I love marmite.

How I became a gull lover (known as a larophile) is a long story saved for another time. Love or hate them, you can’t help but hear their springtime calls as they try to find a chimney which doesn’t have spikes or wire cages on, to build nests and rear their young. Some will be courting and looking for a mate, others will also appear to be doing this but are actually strengthening their bond with an existing mate or renewing their vows as we may describe it! They are devoted partners, mating for life which can be as long as thirty years. 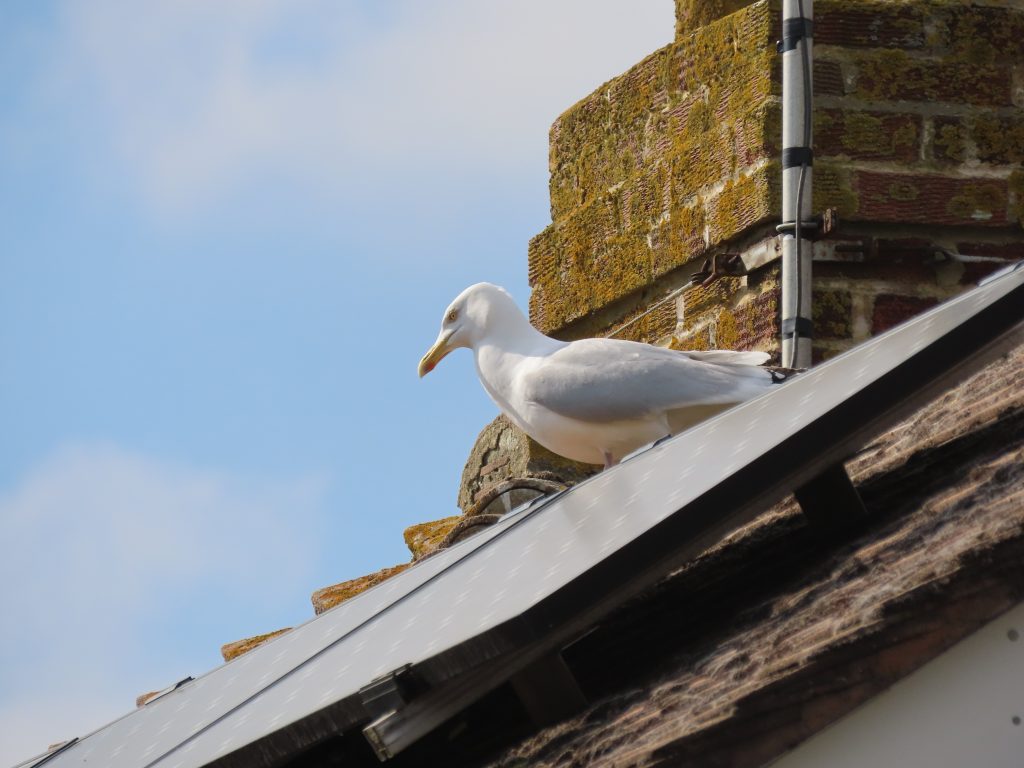 If you hear them making more fuss than normal and look up you may see them ganging up with crows to chase off a buzzard or other bird of prey. Buzzards are a breeding success story and now becoming a common sight circling high above our heads in the Greenhavens area.

A chattering in a tree above caught my attention and I saw a goldfinch with its striking red face demonstrating the meaning of ‘twitter’ as its ancestors had done since long before people misappropriated the word. Goldfinches are another success story- becoming much more numerous in recent years partly due to help from garden feeders.

I passed the end of a twitten that I wouldn’t normally notice driving past. I have no idea where it goes! Seaford has vast numbers of twittens and when my children were young we would go on twitten walks and see where we got to and how far we could get without having to walk too far along a proper road. I think of them rather like Diagon Alley in Harry Potter -in the same world but separate! 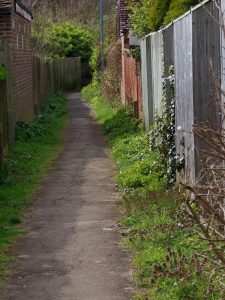 Plus of course they very often act as little highways for wildlife as well as children – I have certainly met a fox walking towards me before and been nearly as surprised as it was. Wildflowers can flourish mostly unchecked along the edges and where there are flowers there are insects and birds. Explore I dare you!

Cutting through Sheep Pen Lane my eye was drawn to a bushy, green, and at first glance unremarkable plant. Growing on a bit of soil that had gathered in front of a garage was a wild plant known as Stinking Hellebore! It doesn’t actually smell until the leaves are crushed but every part of this plant is poisonous so best to steer clear. Stinking hellebore surely must have featured in Harry Potter – you’d be hard pushed to think up a better name for a potions ingredient!

Bees are obviously immune to the poison as many were clamouring to get at the flowers. If the lockdown continues and the garage remains unused this fantastically named plant may even have time for its flowers to run to seed and thus fulfil its purpose. 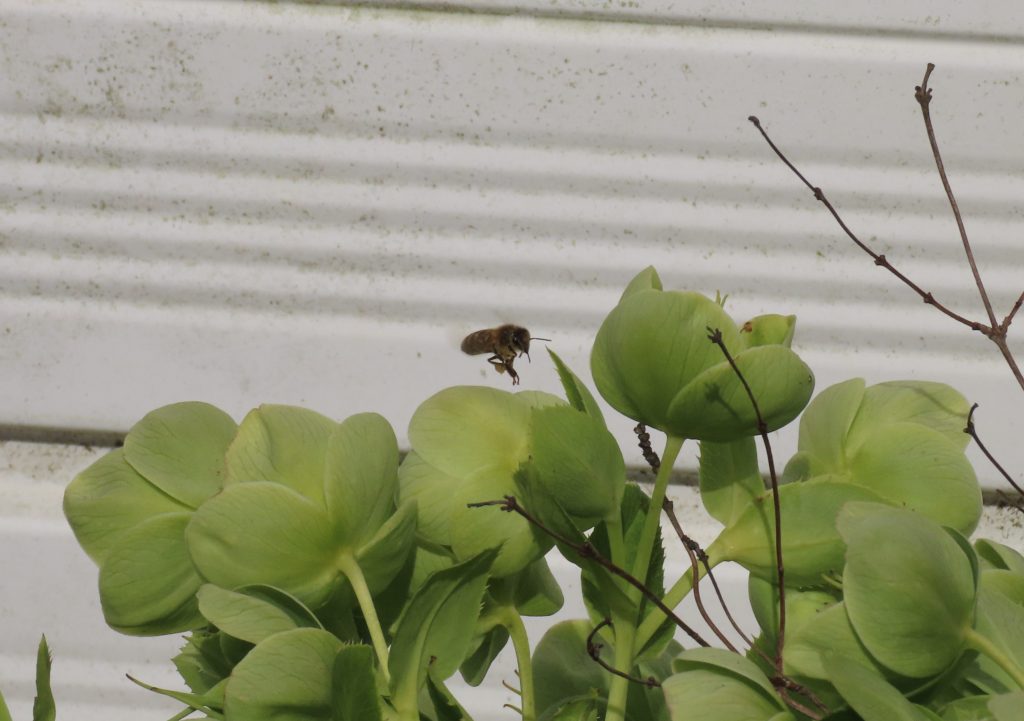 Crossing back over the A259 I went through the car park at the leisure centre where there were no cars, but around the edges masses of daisies, lesser celandines and dandelions – just as a lovely as a formal bed to me.

A quick look at the buds on the trees and I was heading back home with just a last sympathetic smile at the sycamore sapling trying its best to hide behind a drain pipe- I don’t rate its chances I’m afraid!

So, just a short walk around my urban patch but so much to see now we can slow down and take our time, while of course observing the advice. I saw very few people and we all kept 2m apart but we still managed a smile and a nod as we’re all in it together.

It would be great to hear about anyone else’s urban safaris, what you saw and heard or where you went exploring. 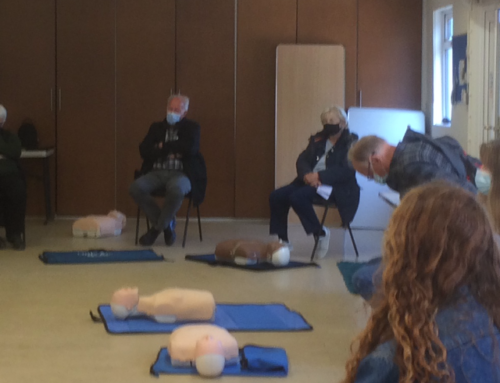