(Many thanks to Pete Varnham for the stunning photographs of the cream spot tiger moth!) 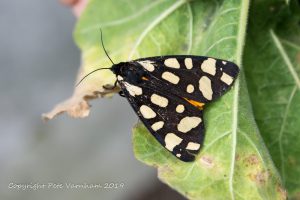 In June, the Butterfly Conservation teamed up with You Gov to ask the public what they thought about moths. The results showed that there are a lot of myths and misconceptions bandied about.

The survey found that almost three-quarters of the people surveyed have some negative opinion of moths. Many people believe the majority eat clothes, 17% of respondents describe moths as ugly and 12% believe they are scary. Fewer than a third of all the people surveyed believe moths are important (21%) and interesting (29%).

Butterfly Conservation are on a mission to dispel those moth myths and demonstrate just how marvellous the UK’s moths really are! In fact, far from being pests, the vast majority of moths play vital roles in the food chain and as pollinators. find out more here

Moths are fascinating, but a lot harder to identify than butterflies. There are just so many different ones, and so many that are tiny and hard to see, let alone identify. 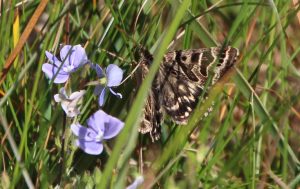 One sunny day a while back I thought I’d found a grizzled skipper butterfly up on Malling Down. Looking more closely at the photograph this actually turned out to be a moth. The Mother Skipton moth (named after a 16th century Yorkshire witch) has wing markings that look do resemble the face of a witch!

Some moths do fly during the day. The six spot burnet moth is one of the most common. It’s often spotted flitting like a miniature red helicopter over downland such as Seaford Head. You may even spot one emerging from its papery cocoon on a stalk of grass. 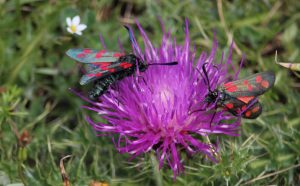 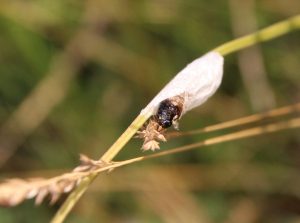 Many moths only fly at night. You can attract night flying moths into your garden by growing night scented flowers, such as nicotiana, jasmine, sweet rocket and honeysuckle.

The best way to see night flying moths is setting a moth trap. Sussex Wildlife Trust did this at a local Open Garden and among the moths caught was the buff tip moth, which looks exactly like a twig! Spot the moth in this picture

We are lucky in the Greenhavens area to have some expert naturalists, who can help identify the species found in our green spaces.

Castle Hill Nature Reserve in Newhaven is managed by The Castle Hill Group of volunteers, who recently celebrated their twentieth anniversary. This award winning group protects and cares for the reserve, working closely with the council’s nature reserve team. Their work includes surveying and recording the wildlife, restoring and creating habitats, maintaining footpaths, and running wildlife events and celebrations.

Castle Hill is a favourite local green space, with a variety of habitats including chalk cliffs and grassland, mixed scrub, ponds and woodland.  Greenhavens popped along to see what was going on. There was a fine display of celebratory cake, information and guided walks all on offer.

Steve Teale is the resident moth expert and was busy opening a large moth trap and telling an avid crowd of all ages, about the variety of moths that can be found here, and interesting details about their life-cycle. From tiny micro moths, to big colourful moths like the Jersey Tiger moth, it was a fascinating to see and  learn more about these moths, that we would be unlikely to see otherwise. 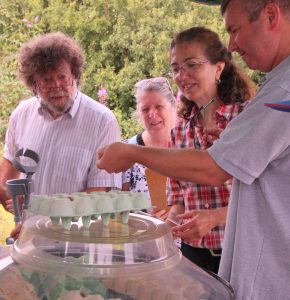 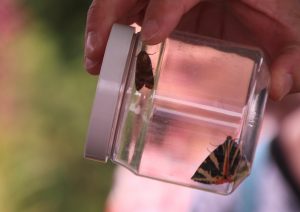 Castle Hill Group have monthly meetings on the first Sunday of the month, where you can help to maintain this beautiful reserve. They also do regular counts of the flora and fauna found here. Do get in touch with them, if you’d like to help out, or learn more about what they do.

Have you seen any moths? Maybe you could help with the mission to debunk those moth myths and let people know more about the fascinating world of moths.

Do let us know what you’ve spotted, and send us your photographs!