(Photo of harvest mouse with kind permission of Leigh Prevost).

The following article is a report of a talk given to the Seaford Natural History Society of which I am a fairly new member.

The society is an organisation whose members collectively share a wealth of knowledge, from those that have a special interest for example, in birds, plants, orchids, fungi, hoverflies – you name it and someone will know about it. Or if on a rare occasion they don’t – well they will know who to ask or where to find out!

The society also caters for those, like me, who are more generalist and have no expert knowledge but are passionate about the natural history of our area, the wildlife and the beauty of the landscape in which we are fortunate enough to live.

The society is also very involved in surveying and recording and has a number of projects monitoring wild flowers, reptiles and butterflies amongst others. We are fortunate to be home to some rare residents and with the changing climate, while some species will be in decline, other new species will appear. The results of these surveys are fed into national figures to monitor biodiversity, the welfare of different species and the effects of climate change. We work in close partnership with Sussex Wildlife Trust and other like-minded organisations.

The society meets fortnightly through the year with outdoor activities in the summer and indoor talks in the winter.

You can find out more and read other reports on the website: www.seafordnaturalhistory.org.uk

At our second indoor meeting of the season, we were fortunate to welcome Laurie Jackson, a freelance ecologist, formerly of Sussex Wildlife Trust.

With the help of her slideshow, Laurie took us on an exciting, whistle-stop tour to discover the small mammals that may be found in our local environment.

There are a total of 107 mammal species in Great Britain, small, large and in-between, terrestrial and marine, native and non-native. However our focus for today was the small mammals of Sussex, which broadly break down into two groups- rodents and insectivores.

There are a number of points to consider in attempting an identification such as: general size; the length of the nose/snout; size of ears; size of eyes; length and hairiness of tail and colouration.

Autumn is a very good time to be out looking for small mammals. Their populations are at their highest following the breeding season and vegetation is starting to die back. Hibernation will not yet have started for those that hibernate but the shortening hours of daylight will be causing them to start moulting.

We looked first at the Wood Mouse very commonly seen in gardens as well as woods. The wood mouse eats a varied diet and is something of an opportunist having even been known to feast on other mice found hibernating! It has a very high breeding rate with several litters a year.

Very similar in appearance is the Yellow-necked Mouse.  In order to differentiate one must turn it upside down where the yellow neck (or chest) can be clearly seen as a broad band of darker fur – but beware as it is rather a feisty individual!

The Harvest Mouse with the delightfully descriptive Latin name of MIcromys minutus is the smallest of our mice with an average weight of only 6g and the only one with a prehensile tail. Its tiny size results in the need to spend a vast amount of time eating in order to obtain its required 7 calories per day. Laurie explained that the human equivalent would enable her to eat 109 packets of her favourite chocolate biscuits every day!

Their tiny size is also a contributor to the poor survival rate with an estimated 95% not making it through the winter.

Numbers of this and the other small mammals are hard to quantify, recordings of course are only as good as the data reported and this is quite patchy.

The presence of harvest mice can be observed by finding its nests made of woven and still living material such as grasses above ground.

The House Mouse with which most of us are quite familiar is a prolific breeder and commonly seen.

The Hazel Dormouse is the only native UK dormouse, generally in decline but in Sussex populations remain quite healthy. They thrive in diverse woodland habitats – the name being something of a misnomer. They have a varied diet, including birds’ eggs and will increase their weight from 10-15g  to 35g before hibernation.

The Edible Dormouse, included for completeness is a much larger non- native, found only around the Chilterns, not in Sussex.

There are two kinds of rat, the one we are most likely to see being the Brown Rat.

With a long, hairless tail, it is often found around water and can be easily confused with the water vole so it is important to differentiate if making recordings.

The Black Rat, darker and smaller is less usual locally but may still be present around ports and coastal areas.

In Sussex, we have three types of vole. 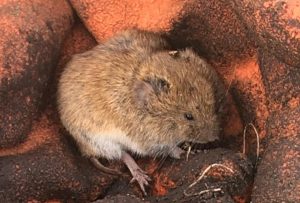 The Field Vole, prey for many types of predator and identifiable by its short tail is mainly herbivorous, has a 3-4 year population cycle and can be very abundant at its peak.

The Bank Vole has a longer tail and is also heavily preyed upon.

The Water Vole has declined dramatically in number due to loss of habitat, increasing urbanisation, pollution but probably mostly due to the spread of the escapee American mink and is now critically endangered.

Although the water vole has a number of strategies for protection, foremost being to kick up clouds of sediment to obscure visibility, unfortunately this is not effective against the mink.

Its average lifespan is only 5 months.

There are three main populations in Sussex (none in our immediate vicinity).

The insectivorous mammals include shrews, moles and hedgehogs.

Pygmy Shrew our smallest insectivorous mammal weighing 2-6 g, has a two- toned coat and a domed head. It is active both day and night with cycles of frenetic activity followed by rest periods.

The Water Shrew is found in aquatic habitats having a dark coat and fringed tail which can act as a rudder. Its diet is 50% aquatic and 50% terrestrial invertebrates and it employs a venomous saliva containing neuro- toxins to stun its prey.

The Mole is rarely seen by virtue of its underground life which is still poorly understood. Its presence is indicated by its molehills, more prevalent at different times of year, but young animals can be seen when dispersing for new territories. They may also be seen in times of flood or drought, but are very vulnerable above ground. Underground they use feet adapted for digging and have enhanced sensitivity to low frequency sound which is used to detect earthworms and larvae on which it feeds and will cache.

The Hedgehog easily identifiable to most people and which was the subject of our last talk is, as we know suffering serious decline.

Before the break, Laurie tested our newly acquired ID knowledge with some slides- I think it is fair to say we found them quite challenging!

After refreshment, Laurie spoke about recording and surveying methods.

More information can be found at http://www.sussexmammalgroup.org.uk/. This is also where sightings can be recorded and we were encouraged to get involved with this.

Laurie recommended NHBS as a first port of call to look at good quality equipment. https://www.nhbs.com/

Jim thanked Laurie for her most informative talk and proposed that the society considered getting more closely involved with surveying and recording mammals alongside our other main interests.

We love this! Many thanks to Ann for her comprehensive report, and SNHS for sharing it. Do check out the website for more information about the group, and other reports from their meetings.