In mid November we had an unusual visitor when a great bustard was spotted in Sussex, causing great excitement in bird watching circles. Greenhavens member Mike Kerry managed to get some photographs of the bird while it was between Denton and Bishopstone, feeding on kale in a field adjacent to Stud Farm.

Great bustards used to be found on chalk downland in southern England, and evidence shows the species was native rather than introduced. Traditional birds of expansive grass plains, they adapted well to arable farming in some European countries. There are large population in central Spain, and smaller ones in Russia and Hungary.

In Sussex they were known as “shepherd’s wild turkeys” the biggest wild birds ever to have lived in Sussex. An adult Great Bustard can have a wingspan of some six feet and weigh as much as 40lbs!

Sadly the large (perhaps tasty!) birds were popular hunting targets and became extinct in the UK in 1832 when the last bird was shot.

The birds only returned to the UK in 2004 when the Great Bustard Group started a 10 year trial reintroduction project on the army base on Salisbury Plain, Wiltshire, which is doing well. The birds are ring tagged when released, and the released birds are now started to breed too, with a healthy population surviving in Wiltshire.

You can watch a video with more information here

Bustards are indeed “great”, and in fact the heaviest flying birds in the world. Great bustards are completely ground-dwelling birds and sociable, normally found in flocks. Their notoriously shy and wary behaviour can make them very difficult to observe. Their diet is primarily plant based, though the young and adults also eat insects and larvae, but also voles and lizards.

Mike tells us more about where he spotted it.

“The great bustard was in a field adjacent to Stud Farm. Two of my shots were taken from Elizabeth Close at the very top North corner of Bishopstone Estate. Apparently the Bustard had a ring that showed it was a 5-month old female that had come from Salisbury Plain. Presumably it was the same bird that had been seen at Birling Gap a week or so earlier.”

Thanks so much for sharing your sighting Mike. What a fascinating bird!

If you are keen on bird watching, the website of the Sussex Ornithological Society is a great place to find out more. The society has over 2000 members, and membership gives you access to lots of benefits including regular newsletters, with news of recent sightings, articles by members and forthcoming events to keep everyone in touch.

You also receive a free copy of the Society’s award-winning annual Bird Report with a full list of birds seen in Sussex and an invite to the annual conference in late January. The one coming up has some excellent speakers including Lucy Groves (White Stork Project Officer with Durrell Wildlife Conservation Trust based at the Knepp Rewilding project) and David Howey talking about a scientific study of the Splash Point Kittiwakes in Seaford.

Their website is a great place to read about recent sightings of birds, and a great way to learn how to connect with other bird watchers and help identify more unusual species. 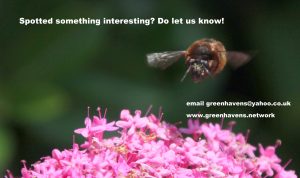