Following on from our “Apple Day” theme, today we have an update about the Peacehaven Community Orchard from Bryn Thomas of Brighton Permaculture Trust,  which was presented at the Community Orchard’s recent AGM.

The idea is to establish a traditional orchard of over 100 large fruit trees containing all the Sussex apple varieties. The aim is to grow strong trees that withstand attack in a natural environment! Pest and diseases will be present but the permaculture approach is to achieve a balance of pests and predators by creating a balanced ecology.

The first apple trees were planted in the winter of 2015 – 2016 and are now in their fourth growing season. We have planted trees each winter since then, with 19 planted last winter. There are at least 16 trees left to plant and I am proposing that we plant roughly half this coming winter and half the following winter.

A significant number of the apple trees have established really well which is testament to the hard work put in by the Orchard group and the quality of the soil and the protection we have provided.

Action to aid establishment:
– Continue to cut off all fruit immediately after formation on tree in their first year and trees which aren’t doing so well;
– Thin the fruit on the rest of the trees down to a few a apples 15-21 June. 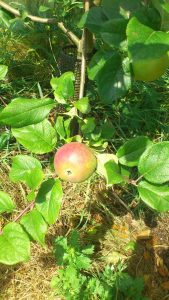 The site has a few problems. The most significant problem is of course the wind, see ‘shelter’ below.

The compacted soils are getting better thanks to the work of the plants and worms. Though the trees are establishing quite well I do fear that the compaction at depth is still an issue which could affect the trees ability to get moisture in prolonged dry weather.

Action:
– Consider mechanical decomposition along the rows, I’d be happy to discuss this;
– Water newly planted tree in the first two summers and all trees in extreme dry weather;
– Mulch trees with woodchip.

Voles have been a real problem nibbling through the roots and the bark at the base of the trees, they have killed probably about 10% of the trees were planted and may be responsible for more trees not doing so well. This level of damage is unusually high. It is perhaps a sign that it is a young changing ecosystem and vole population has risen rapidly to take advantage of the new environment with insufficient predators around.

Action:
– Remove the mulch membrane which provides a home from for the voles around the young trees that are now established and apply more woodchip;

The most significant problem is of course the wind. The recent strong winds (unusually strong for summer) have shown how necessary the shelter netting round the apple trees are, with the bits of the trees sticking out being badly wind burned. Windburn doesn’t kill trees but it gives them a very severe setback. I’m sorry to say the maintaining the shelter net around the apple trees until the shelterbelt is able to provide protection will take some considerable effort for a number of years to come.

We planted most of the shelterbelt trees in the winter of 2014 – 2015. The growth rate has varied a lot, I expected this, but not quite as much as they have. The best parts of the shelterbelts with Italian alder, Monterey pine, sea buckthorn and willow are doing really well and are beginning to give real wind protection now.

However there are gaps where less trees have survived and the ones we planted haven’t done as well. The recent windburn to the apple trees has show how necessary a good shelterbelt is.

I recommend:
– Planting more trees in the gaps, especially in the SW corner
– Liaising with the council about planting more trees to the south of the road way to the sewage works, I’d suggest hundreds;
– Considering planting some fast growing trees (Italian alder?) in the rows of apple trees with a view to cutting them out as the orchard matures, or shrubs (Eleagnus?) to support the apple trees. 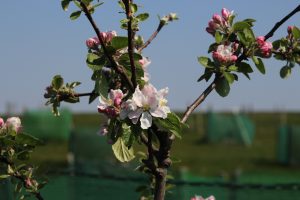 Many thanks for the update on this wonderful project. If you would like to get involved with the community orchard, you can find more details about volunteer and fundraising days on their facebook page.