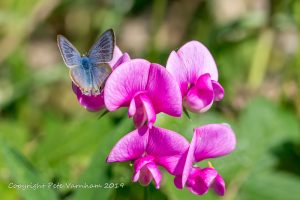 Many thanks to Pete Varnham for the fantastic photographs, and to volunteers at Castle Hill for sharing this fantastic story.

Until 2013 the Long-tailed Blue butterfly was an extremely rare migrant to the British Isles. It was first recorded in Brighton in 1859, and for the next 155 years a mere 121 individuals were recorded in the whole of the United Kingdom. Here in Sussex just 22 were seen over that period, the last sighting being in 2007

The last six years, by contrast, have been rather exciting for the butterfly; 65 were spotted in Sussex in 2013, and a further 38 in 2015, with Newhaven featuring prominently on both occasions. The 2013 event resulted in two small stands of Broad-leaved Everlasting Pea at Castle Hill being searched for eggs and caterpillars resulting in the discovery of 2 larvae, together with a brief sighting of a single worn female. A Sussex -bred butterfly was flushed from Castle Hill’s “moth glade” late that season.

However, the most noticeable influx by far has occurred this year. On the 17th August, following a tip off from Neil Hulme at Butterfly Conservation Sussex Branch, two eggs were found on the very first flower raceme inspected. A total of 9 eggs were finally winkled out, some of which had already hatched.

The next day Neil himself came along to view the Everlasting Pea, followed soon after by a television crew from South East News turning up with Yvette Austin, their environmental reporter, to interview him and film the pea at Castle Hill.

All the attention had encouraged others to come along and look at Castle Hill Local Nature Reserve, and as a result of this another rather rare migrant, the Jersey Tiger moth, was spotted around one of the gun emplacements.

Some of the Castle Hill volunteers were enthused to check Everlasting Pea plants in their gardens, and elsewhere, with some degree of success. Thyone (LDC local ranger) for example, managed to locate a large batch of eggs in the beer garden at The Abergavenny Arms in Rodmell!

By the 14th of September some of the earliest laid eggs had already metamorphosed into adults but there was also a sudden and unexpected second influx of primary migrants that began to mingle and mate with the Sussex – bred specimens. This resulted in the rather surreal situation (for the UK at least) where adults, caterpillars, pupae and eggs were all co – existing simultaneously. 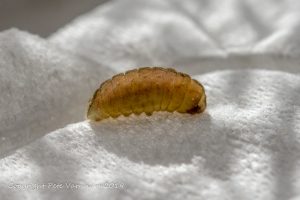 Soon volunteers started to notice one or two adults getting among the fresh gorse flowers, presumably to lay eggs, on the Castle Hill transect walk.

At the end of September/early October the majority of the ‘first wave’ migrants began to hatch in some numbers. Unfortunately the weather by this point had deteriorated to the point where wind and constant rain was keeping the adults firmly hunkered down. It is almost certain that the majority perished through this month of dreadful inclement conditions, but nevertheless some good photographs were taken by Peter, and others. 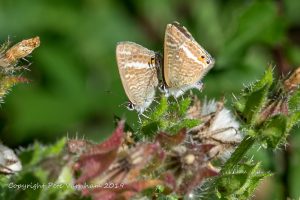 A quite remarkable season that will go down in history as the year of the Long – tailed Blue!

Editor note: Such a fantastic success story from the Castle Hill reserve. I recently joined the group on their regular Sunday meet up. This month they were doing conservation work in the “moth glade”, a lovely hidden clearing, which is specifically managed for moths and butterflies. The work involved cutting, raking and burning some of the emerging scrub. This should leave a variety of habitat for different moths, and space for pollinating flowers to emerge in the Spring. 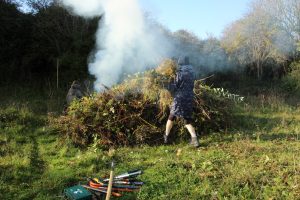 They are a friendly group, do get in touch with them if you would like to help on volunteer days, or learn more about the reserve. I was also promised there would be baked potatoes at the December volunteer day! The group also have some fantastic experts who regularly record the flowers and wildlife seen. It’s really important that we do this in our green spaces, so we can protect these precious spaces and the wildlife that live there.

You can read more about Castle Hill group, and moth trapping in our recent blog.