Wow what an amazing day we had at the tree planting event – we originally had 420 trees made up of Blackthorn, Crab Apple, Dog Rose, Elder and Rowan from the Woodland Trust to plant. These trees were free under an initiative by the Woodland Trust and came with rabbit guards and stakes.

The Newhaven Mayor, Graham Amy had some Willow and Silver Birch which he swapped for our Blackthorn to take the planting figure up to 600. On the day we also had a donation of oak saplings from Newhaven Town Crier, Jason Ede and further donations from members of the community which they brought along on the day. 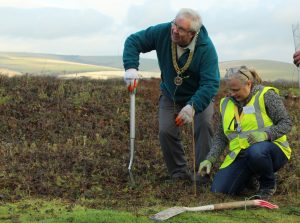 With roughly 200 people from the community and beyond (including Watford, Kent and Hastings) we managed to plant 600 trees by mid morning. Graham very kindly donated the remaining 200 trees he had. By 2.30pm we had planted over 800 trees. There are also some Black Poplar in the pipeline and some Aspen and Rowan to be planted around the new play park and some more oaks have been donated but not yet arrived. 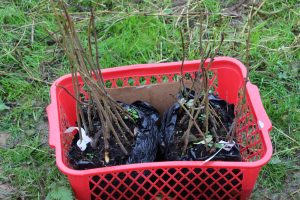 We had plenty of families planting with their young children, teenagers and it was a great atmosphere as everyone worked together. Planters were offered wooden lolly sticks to write their name on, to plant with their trees.

Riverside Park is going to be an amazing green space for everyone to enjoy in the coming years. Not only have we improved the habitat for wildlife, we’ve increased pollination provision and we’ve made a stand against climate change.

Going forward we’ll need to keep an eye on the saplings to ensure they get the best chance. We’ve already started mulching and this should be completed over the next couple of weeks. Over the next 4 or 5 years we will need to mulch every autumn and possibly remove weeds and scrub from around the planting areas throughout the year. There is an idea in the making that we could have a “mulching party” this time next year and ask the community to come and help. 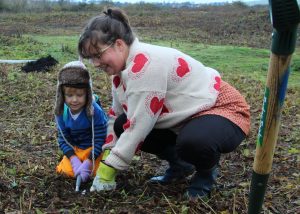 So many people and organisations to thank and of course the amazing families, friends and supporters who turned out on the day; we really couldn’t have done without you! Special thanks to the Friends volunteers who made delicious sandwiches and cakes and Mary and Jean who kept the kettle boiling for hot drinks to keep us going. Thank you to everyone who brought in cakes and sausage rolls too.

I think the photos taken on the day speak for themselves! Apologies to those we had to turn away and thank you for the positivity you showed even though we know you were extremely disappointed.

There have been lots of other tree events in Greenhavens during National Tree Week. You can read more about these here. 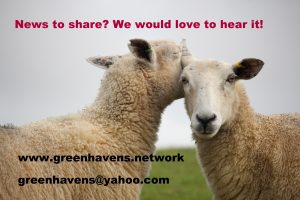